All the Lives We Never Lived has been shortlisted for the International Dublin Literary Award. 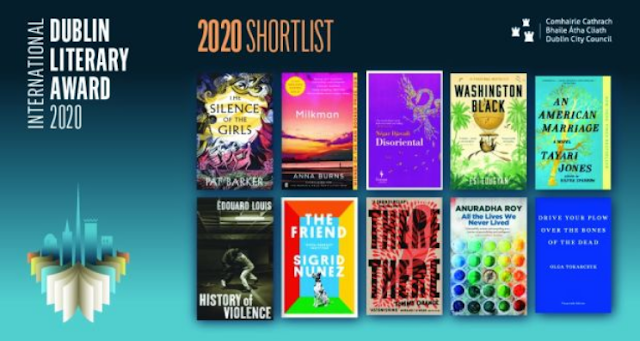 The shortlist is drawn from a longlist of 156 novels submitted by library systems in 119 cities in 40 countries.

The statement from the judges said:

"Set in the 1930s, Anuradha Roy’s new novel is like an Indian raga that continues to resonate long after you have finished the last chapter. Myshkin is the nine year-old protagonist, and the central event in his life is revealed in the novel’s opening sentence: “I was known as the boy whose mother had run off with an Englishman”. The Englishman turned out to be Walter, a German, who had to leave British India in a hurry, taking Myshkin’s beloved mother, with him, triggering a memorable saga of love, memory, kindness, human frailty and the devastating loneliness of a boy."

Listen here to brilliant actors reading from the shortlisted books

Excerpted below is a report by Martin Doyle in Irish Times

Anna Burns, Olga Tokarczuk and Tayari Jones, winners respectively of the Booker Prize, the Nobel Prize in Literature and the Women’s Prize for Fiction, are among the 10 authors shortlisted for the 2020 International Dublin Literary Award.

The €100,000 award, sponsored by Dublin City Council, is the world’s most valuable annual prize for a single work of fiction published in English.

Eight of the shortlisted writers are women, including Canadian Giller Award winner Esi Edugyan for Washington Black and US National Book Award winner Sigrid Nunez for The Friend, and three are novels in translation.

As well as Ireland, Poland, the US and Canada, the shortlist spans Britain, Iran and France. Of the shortlisted works not already garlanded with awards, perhaps the standout title is There There by Native American author Tommy Orange. The judges said of it: “the devastating history of genocide against Native American people rubs up against the everyday lives of this cast of contemporary ‘Urban Indians’ with astonishing effectiveness”.

Read an interview in Hindu here.

Read an article from the India Abroad News Service here

A Letter from Luxembourg

The French translation of All the Lives We Never Lived had a bumpy start. Its release in March 2020 crashed full tilt into worldwide lockdowns. Bookshops were shut, literary festivals cancelled, reading seemed to be the last thing on people's distracted, panic-stricken minds. I thought the book would sink to the bottom of the sea floor and rest quietly there along with other wrecks.
But readers are tenacious people. The other day there was an email from one of them, Valérie Voisin, which I am reproducing below unaltered because it so vividly and movingly describes her experience of how she got and read a book by an author unknown to her, during a lockdown.
I am grateful to Valérie for taking the trouble to write to me and for giving me permission to reproduce her message. 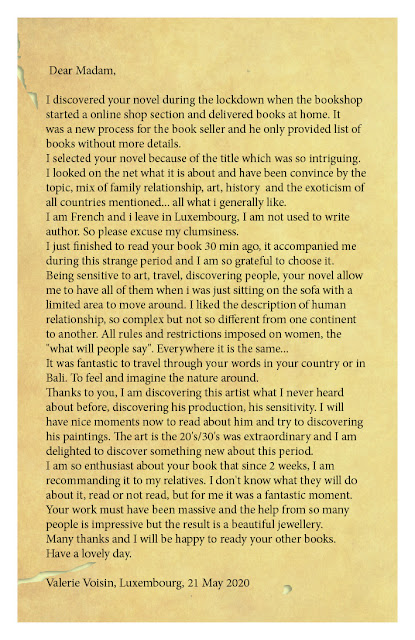 I discovered your novel during the lockdown when the bookshop started a on-line shop section and delivered books at home. It was a new process for the book seller and he only provided list of books without more details.

I selected your novel because of the title which was so intriguing. I looked on the net what it is about and have been convince by the topic, mix of family relationship, art, history and the exoticism of all countries mentioned... all what i generally like.

I am French and i leave in Luxembourg, I am not used to write author. So please excuse my clumsiness.

I just finished to read your book 30 min ago, it accompanied me during this strange period and I am so grateful to choose it.

Being sensitive to art, travel, discovering people, your novel allow me to have all of them when i was just sitting on the sofa with a limited area to move around. I liked the description of human relationship, so complex but not so different from one continent to another. All rules and restrictions imposed on women, the "what will people say". Everywhere it is the same...

It was fantastic to travel through your words in your country or in Bali. To feel and imagine the nature around.

Thanks to you, I am discovering this artist what I never heard about before, discovering his production, his sensitivity. I will have nice moments now to read about him and try to discovering his paintings. The art is the 20's/30's was extraordinary and I am delighted to discover something new about this period.

I am so enthusiast about your book that since 2 weeks, I am recommanding it to my relatives. I don't know what they will do about it, read or not read, but for me it was a fantastic moment.

Your work must have been massive and the help from so many people is impressive but the result is a beautiful jewellery.

Many thanks and I will be happy to ready your other books.

Have a lovely day.