Almost each time I am travelling to a country I've never been to, Christopher Maclehose, my publisher, sends me a book for the journey. On my first trip to Bali, he had sent Christina Jordis's Bali, Java, in My Dreams -- which introduced me to Walter Spies and started off my new book. When I was going to Iceland earlier this year for the Reykjavik Literature Festival, he gave me Independent People, by Halldor Laxness. 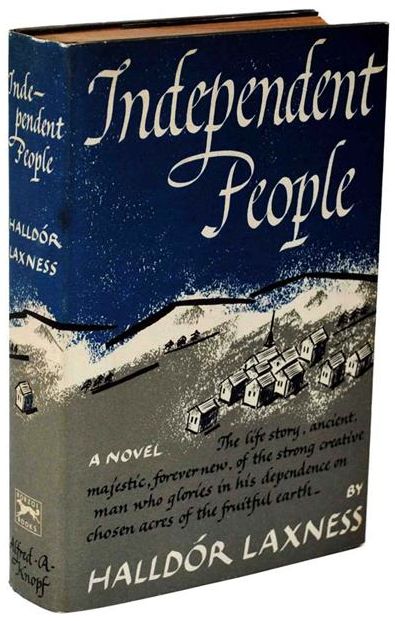 This magnificent, engimatic tragedy is not to everyone's taste. When it was published in the US, Kirkus Reviews called it "A bleak and bitter book, with little to interest or attract the American reader". But I am not American, and although it mystified me at times and its main character Bjartur often made me very angry, this is one of the most brilliant books I've ever come across. It haunts me still, weeks later, and despite its length I know I'm going to go back to it. I don't know how it read in Icelandic, but in English translation, the writing is magical.

If you have not read it yet, settle in, give it time, lots of time -- think War and Peace or The Idiot -- and you will feel enriched and altered by the end.

Here is a good review of it, from Crooked Timber, by Chris Bertram:

I finished Halldor Laxness’s Independent People a few weeks ago. It took me a very long time to read. Usually this is a sign that I’m not getting on with a book, but not in this case. Rather, Laxness’s prose is so rich, his descriptions are so compelling and his observations so unsettling, that I found it hard to read more than a few pages at a time without taking a break. Certainly it is the best book I’ve read all year, and maybe over the last five or so.

Independent People, which won Laxness the Nobel in 1952, is (among many other things) the story of an Icelandic crofter, Bjartur of Summerhouses and his family, especially his daughter Asta Sollija. Life is hard, it is cold, it rains, there are sheep, there are long discussions about worms and other parasites. Not tempted? I admit that the apparent dreariness of the subject-matter had me doubting when I first bought my copy. But I’d been recommended it by someone who had been so captivated that she’s booked a holiday in Iceland on the strength of the book. Well, when someone whom you think of as having good judgement does that, it is worth giving a book a try.

One way of reading the Independent People is as a satire. The two Icelanders with whom I’ve discussed it say how funny it is (as does Jane Smiley on the cover blurb). Once you are several hundred pages in, it is easier to get the jokes, but much is inevitably lost on non-Icelanders. The title refers to Bjatur’s obsessive desire for independence and the way that he permits neither financial encumbrances nor ties of personal affection to disrupt his independence. In the end, this stubborn refusal of vulnerability turns out to have been a mistake, and a mistake that Laxness sees as permeating the Icelandic national consciousness. But that’s only one way of taking the book. It is also a meditation on peasant life at the edge of survival, on traditional cultures, and, more universally, on human relationships. Bjartur’s understanding of the landscape around him is mediated by his knowledge of myth, of the Icelandic sagas and of a tradition of oral poetry. This understanding of the present in terms of a heroic literary tradition is both mocked and celebrated by Laxness. Celebrated in the way in which Bjartur is able to endow his most mundane of actions with meaning because of his access to that canon; but also mocked because this leads him into a comical misperception of his real relations with both nature and others. He casts himself as a hero, and this enables him to endure against cruel setbacks and in hard conditions; but it also makes it impossible for him to encounter his daughter as a real individual.

I’m going to read the Independent People again soon, since I’m sure that there’s much I’ve missed. Laxness’s writing and insight is often superb. There’s one passage where he describes Bjartur’s quest of a lost sheep that is, in fact, already dead in which he evokes Bjartur’s sense of freedom as being in control in a landscape he identifies with. There’s another in which he sets out in a few lines the difference that losing her virginity makes to Asta’s relationship to her family members, even though it will be a while before the consequences of the act become plain. For some reason these two remain especially clear in my mind, but just about every page is a joy.

STRAIGHT INTO YOUR INBOX